The Scroll XY Mod has been enhanced to scroll in both the vertical and horizontal directions. It has more features than the ScrollPage mod written a couple years ago. Unlike the previous versions, buttons only appear on pages with overflowing content. If the content overflows horizontally, scroll right and left buttons appear.

On most pages four translucent scroll buttons appear at the lower right of the display screen. Those buttons scroll to the top, up, down or bottom of the page. 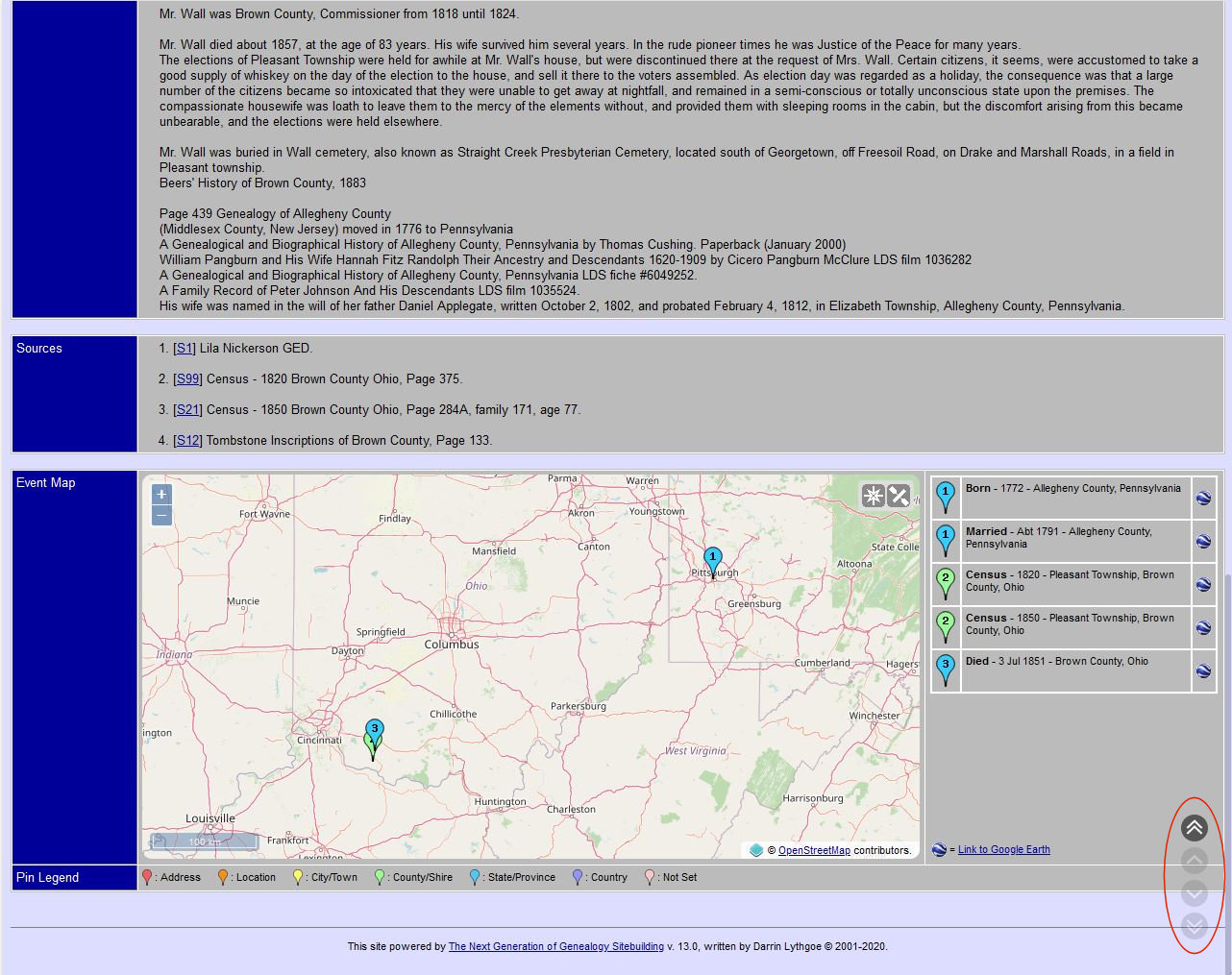 On chart pages with horizontal overflow, there are six buttons with the two additional buttons scrolling horizontally. If the ancestors or descendant generations changes and content no longer overflows, the buttons are hidden. 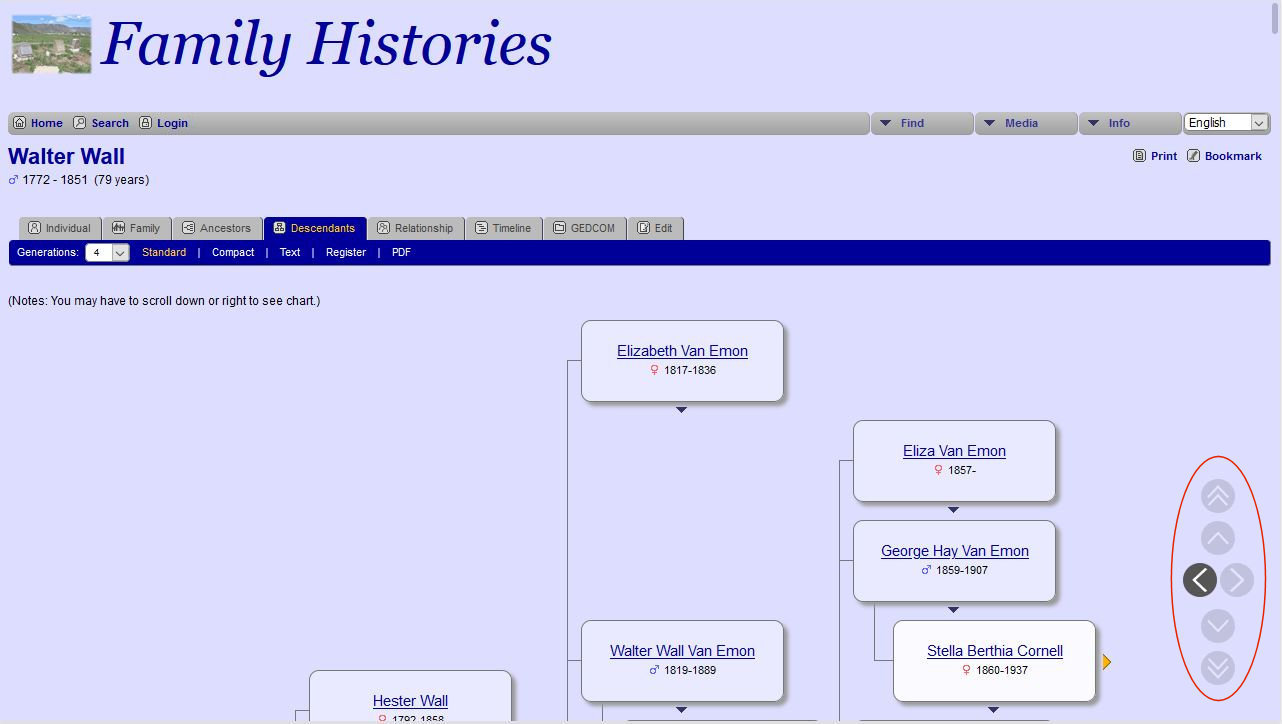 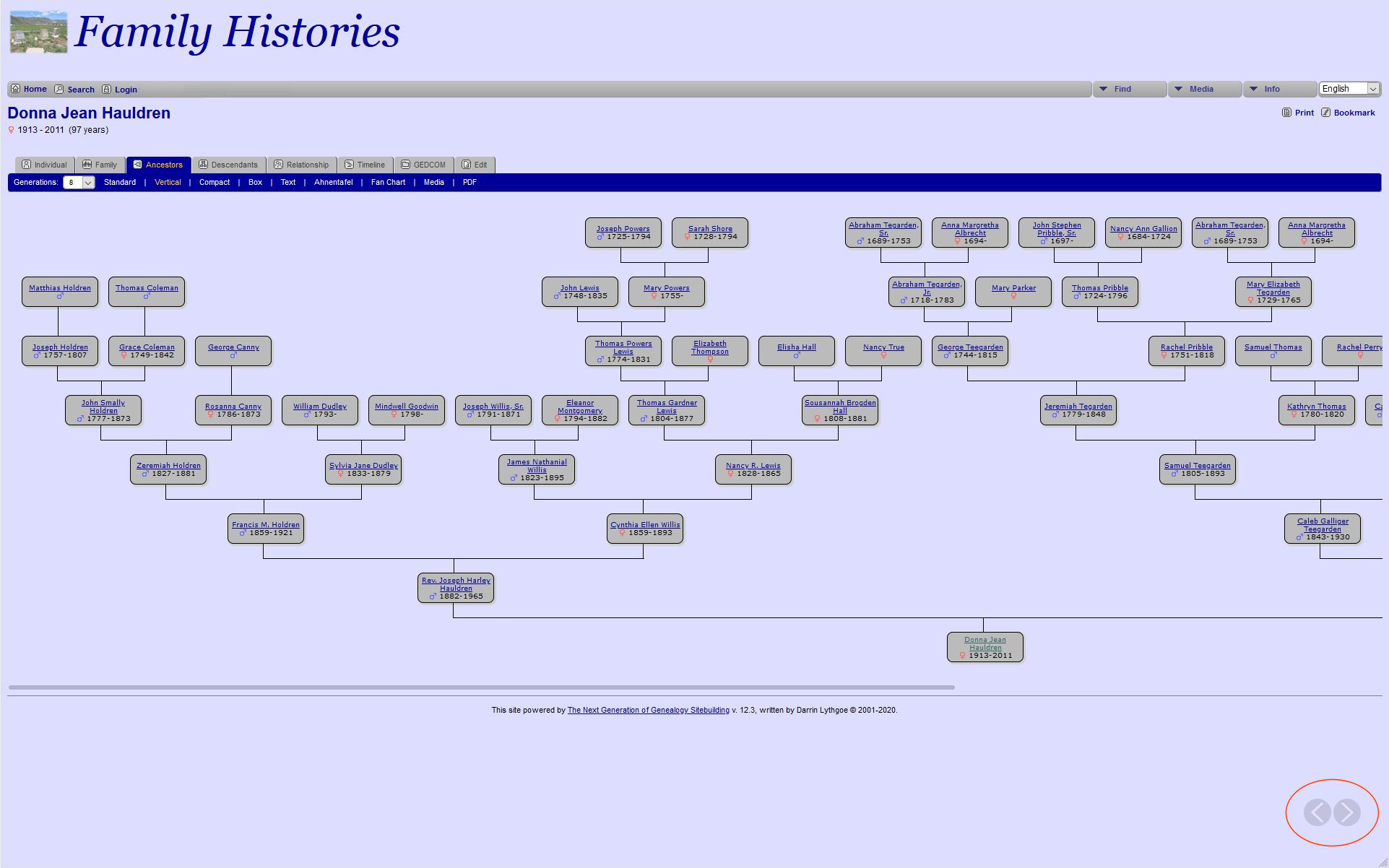 The second option is the number of pixels to scroll before the buttons appear. The range is from 0 to 800 pixels.This setting has no effect if the first option is disabled.

The third option is the horizontal scroll distance. This controls how far the left and right buttons scroll the display. The number represents the percentage of the display width. The range limits are from 10 to 100. A setting of 10 does not scroll the screen very far while 100 scrolls the width of the display.

The fourth option is the vertical scroll distance. This controls how far the up and down buttons scroll the display. The number represents the percentage of the display height. The range limits are from 10 to 100. A setting of 10 does not scroll the screen very far while 100 scrolls the height of the display. This is useful when using a template that has a sticky header and you do not want the last line viewed to scroll off the screen. 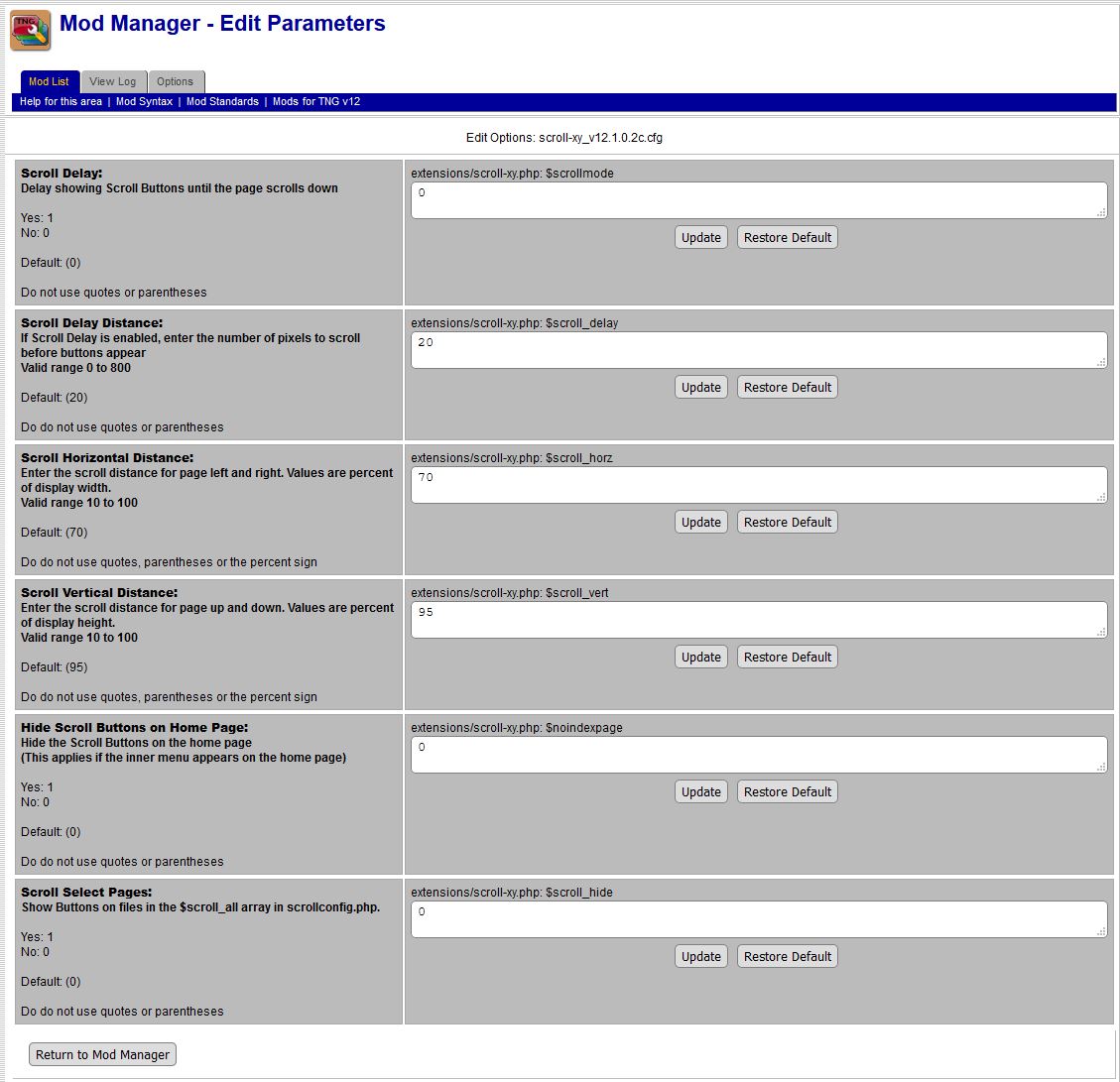 All buttons default to grey but can be customized by adding a few classes to the mystngstyle.css file. The mod uses SVG graphics so pixelation does not occur when changing button sizes. Examples of the classes and their functions are included in the scrollpage-info.css file located in the scroll-xy folder.

For example, the default buttons are 20px high. Add the following code to mytngstyle.css you can easily change the button size.

This mod does not have any known installation conflicts and is compatible with mods that do not change the div tag for TNG pages. There are no conflicts with the ScrollBox mod, however, scroll-xy will not display scroll buttons on pages modified by ScrollBox.
Note that scroll-xy no longer scrolls charts horizontally in TNG v13 due to the new drag feature.


scroll-xy_v12.1.0.4.zip
(7.39 KiB) Downloaded 23 times
Revision in v12.1.0.4
This version hides the Scroll to Top button shown on pages that show scroll-xy buttons. When the scroll select pages option is selected, the scroll to top button is used on overflowing pages except charts, which will use scroll-xy buttons.

Revisions in v12.1.0.2a
Updated the ReadMe.txt file
Corrected some typos in scrollconfig.php
Added more charts to scrollconfig.php
Changed two class names for consistency
Added horizontal scrolling for fan and vertical charts
added link to TNG WIKI
You do not have the required permissions to view the files attached to this post.
Top
1 post • Page 1 of 1